The UK release schedules have never included as many Scandinavian records as they do these days, thanks to the high success rate that they’ve had in the UK charts over the last few years. We all know the list of acts by now, but there has always been one glaring omission. One of the best selling pop acts in Sweden this decade (THE biggest selling act of both 2005 and 2006) has never had any of his records released here. All this despite branching out to mainland Europe two years ago, having a wealth of four albums worth of material to choose from, and laying claim to one of the biggest internet fanbases of any of the current Scandinavian acts. And let’s not forget that in Sweden, he’s the most successful participant of any of their Idol series’ (including our dear Agnes!), after he finished as first runner up in the first season. Well, in November 2009 he’ll finally attempt to work his magic on these shores….. 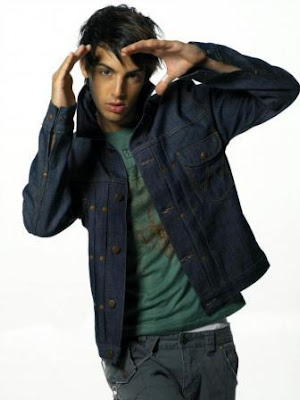 It’s Darin! God knows why he hasn’t been launched here before. But it was the release of his fourth album late last year that finally sealed his deservedness for international success. And that’s even more apparent now that we’ve heard what internationally successful pop music sounds like in 2009 – it sounds exactly like what Darin was producing in the studio last year! He wasn’t one of the first artists to use RedOne as producer (he WAS back in 2005 though!), but he was certainly one of the first beneficiaries of RedOne’s brand new sound. The same sound that has forged monumental tracks this year for Lady Gaga, Enrique Iglesias, Little Boots, Sean Kingston, Backstreet Boys, and Sugababes. His debut UK single, ‘Breathing Your Love’ was also the first cut from the album in Sweden, and the first time we got to hear this quite exciting new pop sound. Accompanied by a very welcome Kat DeLuna (we love her verse!), Darin popped and bounced his way through almost four minutes of tantalisingly restrained melodies constrasting with anything-but restrained electro beats. We’ve carried on loving it ever since, and its parent album ‘Flashback’, which is full of electro/dance/r&b tracks of a similar ilk (actually, we even had a request for ‘Strobelight’ at the last scandipop event!). So we’re immensely happy that it’s getting a release in the UK.

And the label behind it? It’s Upside Records, who are also responsible for bringing Anna Abreu over here. Doing a wonderful job of restoring our faith in the mindset of UK record labels! Its provisional release date is November 29th.