This coming weekend, UK television (Channel E! no less!!!) gets a much needed injection of Scandinavian sex appeal. Glamour Girl Royalty Victoria Silvstedt is getting her own ‘reality show’ – ‘Victoria Silvstedt: My Perfect Life’. 8 episodes of….well…..we’ve all seen the format before. 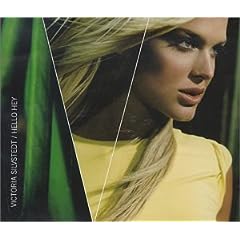 The reason we’re writing about it though isn’t because we’re excited about the show. It’s because it’s reminded us of and caused us to rediscover her AMAZING pop album from 2001!!! The ‘Girl On The Run’ album unfortunately avoided the UK shores and deprived us of its near flawless contents. However, we picked up a copy of the album in Australia five years ago and it remains one of our most treasured pop pieces. She crams in a bit of dance, a touch of r&b, a sprinkling of soft rock, a latino number, and a couple of ballads! Taking to each genre like a duck to water; her voice effortlessly alternating between tones – the versatile powerhouse it is!!! Or something along those lines. The album has three singles lifted from it, each one given a delightfully trashy and classless video to accompany it. All videos are available to view on www.youtube.com as are the album tracks – set to fan made videos of Victoria from her various modelling shoots. Either way – every viewing is a treat!

Pick of the bunch though is her debut single ‘Hello Hey’. Simply put, it’s the epitome of europop. Ridiculous lyrics, unintentionally fragile vocals, and a backing track that sounds like it was concocted by a producer who had just dropped a couple of bombs of speed to get him through what was obviously going to have to be an all-nighter. And it works SO well. Then there’s the album track ‘Astro Girl’ which is near identical to ‘Hello Hey’, and sounds like said producer decided to scrap the all nighter after the speed kicked in, mixed up the ‘Hello Hey’ backing track a bit, and then went out clubbing instead. Again, it works brilliantly. Second single ‘Rocksteady Love’ is a faux Britney pastiche and treats us to vocals from a rent-a-rapper, as well as Victoria herself. The video to ‘Rocksteady Love’ is the most expensive of the lot, and sees Victoria in a tennis outfit for most of it. ‘Partyline’ sounds as good as you’d expect a song called ‘Partyline’ to sound.

Now that Victoria has carved herself a career fronting gameshows on French, Italian, and Turkish television, as well as having her own reality show, it’s unlikely that she’ll go back to pop. It’s our loss but my, what a legacy she’s left in that one album!