This weekend, the Andra Chansen round of Melodifestivalen takes place in Sundsvall, Sweden. It’s the last show before the grand final on March 12th, and the last chance for two more songs to make it to said final. It’s a second chance round for all of the songs which came 3rd and 4th in their heats – thus not finishing high enough to qualify directly to the final, but considered popular enough to be given a second chance. So after four heats, that gives us eight songs that are lining up to grab those last two slots in the final.

One would assume that like in previous heats, the eight songs perform, and then the two that get the highest number of public televotes progress to the final. But it’s a little bit more complicated than that. Instead, there’s a duel format in place. The songs have been drawn to compete one against the other. So the competition begins with eight songs making up four duels. The winners of those four duels then make it onto the next round of two duels, and then the winners of those two duels are the two songs which make it to the final. SIMPLE. More or less! The diagram below visualises things for you; 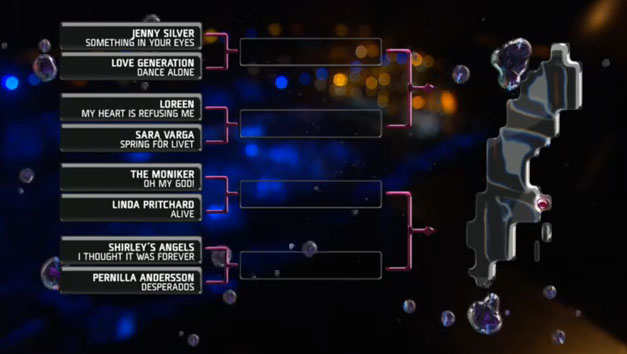 It’s not exactly the most fair way to conduct proceedings, since technically, it’s not the two most popular songs that are making the final. If for example the two genuinely most popular songs are in a duel against each other, then only one will make the final, and be joined by a song that could perhaps be much less popular than the song that has just been trounced. But whilst it’s not a perfect format, it most certainly does make this section of the contest a lot more interesting.

DUEL 1
Jenny Silver ‘Something In Your Eyes’ vs Love Generation ‘ I Dance Alone’
These are our two favourites in this weekend’s contest BY FAR. So it’s beyond heartbreaking that only one of them has a chance of making the final. But that’s the (bad) luck of the draw. In this duel, one of the most historically traditional genres of music in Melodifestivalen comes face to face with the most modern. It’s 70’s inspired schlager vs 2011 pop music. Thus the outcome of this duel in particular could well be one of the most influential results when deciding the songs for next year’s Melodifestivalen, as it will give a clear indication of what Swedes really want from this contest.

DUEL 2
Loreen ‘My Heart Is Refusing Me’ vs Sara Varga ‘ Spring För Livet’
Another two songs that we’re genuinely fond of, and another duel that we think impossible to predict. Both songs have been big fan favourites, and both have got the always beneficial connotation of the underdog doing well, attached to them. Both have also been praised as being something that is perhaps ‘above’ Melodifestivalen, with pop music fans going mental over Loreen’s faultless production, and the Swedish press heavily supporting Sara Varga’s meaningful lyric.

DUEL 3
The Monikor ‘Oh My God’ vs Linda Pritchard ‘Alive’
This one is a little easier to predict, given the overwhelming amount of positive reaction that Linda Pritchard’s emotional performance of the ballad ‘Alive’ has received since its performance on Saturday night. And we’d be very happy with a Linda Pritchard win too. If Jessica Andersson made it through this format last year with the much weaker ballad ‘I Did It For Love’, then Linda P should have no problem.

DUEL 4
Pernilla Andersson ‘Desperados’ vs Shirley’s Angels ‘ I Thought It Was Forever’
Another duel of good ol’ schlager vs something a lot more contemporary. Naturally we’re on the side of Shirley’s Angels here, and we think that she might just be victorious too. Andra Chansen has always been kind to schlager, and indeed to Shirley herself – her classic ‘Min Kärlek’ made it to the final in this way in 2004.