Heat 3 is here, upon us, and knocking our door down with promises of yet more thrills, shocks, and spectacles. And all with a more youthful face than the previous two weeks too, with lots of young scamps lined up to compete (yes, we’re including Shirley’s Angels (pictured above) in that evaluation also!). Who can top Sanna Nielsen’s justified and almost regal triumph last week? And indeed, who could bottom for Danny’s considerable force and might?! Well, Eric Saade of course! Take your minds out of the gutter, we’re only speaking in terms of the likelihood of Eric Saade being the victor this week. Even before the contest started, he has been the betting agnecies’ most tipped to win the whole thing. And so it does seem like he’s the one to beat, and that the other seven artists aren’t actually battling it out for two direct tickets to the final, but rather, only one ticket. So that makes this tough heat, on paper, even tougher.

This morning we arrived in Linköping, and this afternoon we went to the arena and plonked ourselves down in what seems to be our regular spot for watching the Friday afternoon rehearsals – front row, to the right of the middle. The ideal spot to soak up what’s going on as each artist goes through their song three times, and thus giving us the perfect scope to pass judgement.

And here are those judgements; 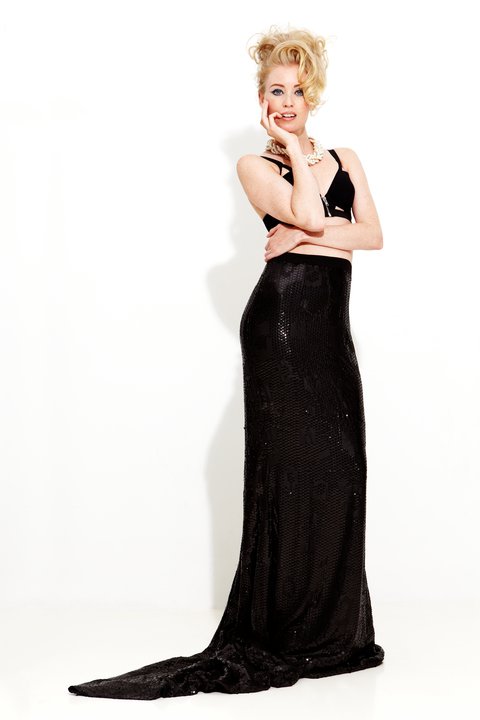 Linda Sundblad: ‘Lucky You’
Linda told us back in December when we met her that this was quite Abba. And whilst it’s not exactly Jenny Silver’s ‘Something In Your Eyes’ part two, we do still get what she means. The melody of the chorus is quite Abba-esque. And it’s certainly catchy too. Let’s describe it as having Abba sentiments written over the poppier stuff from her last album ‘Manifest’. It’s very Linda Sundblad after all, but it’s her giving us a sneak peak at the Pop Princess inside of her. Which she doesn’t often do. And yes, there’s a big key change for the final chorus. Hooray!

The performance is super charming. Well choreographed, six dancers in matching outfits to Lindas, and a big red heart on each person’s chest, to accentuate the “tonight, tonight my heart is wide open” lyric in the chorus. The large group on stage make a big impact. And the performance ends with Linda showing the camera the palm of her hand, which is also adorned with a big red heart. It’s sweet!

There are a lot of guitars at the start of the performance, but DON’T WORRY, they soon disappear!

Simon Forsberg: ‘Tid Att Andas’
Definitely a Nordic ballad, but totally unlike Elisabeth Andreassen’s take on the genre last week. Whilst ‘Vaken I En Drom’ had a more complex and challenging melody, this song is more pop, more simple, and more mainstream. We’d compare it to Sonja Alden’s ‘För Att Du Finns’, and it actually does sound a lot like that, key change and all! ‘För Att Du Finns’ of course ended up being one of the biggest hits of Melodifestivalen 2007 outside of the contest, and this stands a fair chance of repeating that achievement this year, as it’s so likeable. But is it what the Swedes are voting for in Melodifestivalen these days? We’re not sure.

*hops off the fence*

Do we like it? YES. Do we love it? No. But give us time and we probably will – that’s what it took with Sonja Alden in our case too after all!

The performance of the song is very simple, as it needs to be. Simon stands in the centre of the stage in a swanky black suit, and is the sole performer for the whole song – no backing vocalists join him. His vocal isn’t overly confident, just straight forward. And he wears an attractive smile throughout. He’s on the charm offensive here, rather than throwing in everything but the kitchen sink. And that’s a clever move we think. To stage it any other way would have been silly.

Sara Lumholdt: ‘Enemy’
SARA LUMHOLDT, where have you been hiding all of this hotness all of this time! Out she comes, dolled up to the nines as a circus ringleader turned seductress – and you can consider our rings led, and us seduced! Job done!

On stage, she cavorts around a large clear perspex table, which at one point is turned on its side by her dancers so that she can slide her way down. And then her and her troupe run towards a new backdrop with lights and smoke aplenty, to give the viewers something new to ogle, not like they’ll need it!

As for the song, well it’s the first one this week that we’ve loved. It’s that “e-ne-my, e-ne-my, e-ne-my” chorus that gets us going. It’s magic stuff! It was composed by Anton from Le Kid and Niclas Lundin, who both seem to have a good thing going with their writing partnership homages to late nineties and early noughties pop/r&b – the kind that was always written by Swedes for American Teen Queens. They did it for Eric Saade’s ‘Still Loving It’, and they’ve done it again with this. And we like it a hell of a lot!

It starts with sirens and ends with gun shot. AS EVERY SONG SHOULD!

The Playtones: ‘The King’
You all know we love a great deal of dansband music here at scandipop.co.uk, but The Playtones style of dansband music, although it’s very popular, isn’t to our tastes at all. To be fair to them, they’ve attempted to tailor themselves towards the more schlager fans of Melodifestivalen, by singing a Fredrik Kempe song. But we’re still not feeling it. It’s our least favourite song this week. And this disappoints us for two reasons. Firstly, because we would like to get behind the token dansband song in every contest (thank God for Lasse Stefanz next week), we still give ‘Sweet Kissin In The Moonlight’ PLENTY of listens these days, for example. And secondly, because we think that this is probably going to do very well (they’re popular guys, as is their music), and so it’d be good to be pleased to see it again in the final or at andra chansen, either of which it’ll probably end up in.

As for the performance……well, the colour scheme is nice at least. And the two backing singers are a right pair of treats! But it’s just not our thing either.

Shirley’s Angels: ‘I Thought It Was Forever’
And we go from ending the last song with a sad face, to starting the new song beaming from ear to ear (with a slight ‘semi’ going on too – HELLO Shirley Clamp’s chest!!!).

‘I Thought It Was Forever’ is a mid-tempo, drama filled pop trojan. Big on the heart-break and not skimming on the arse-shake either. We’re marking it as a cross between Anna & Maria’s ‘Killing Me Tenderly’ and Shirley’s own ‘Min Kärlek’. We weren’t sure about it after one listen – but after three, we’re liking it a lot. But will that lack of instant appeal go against it on Saturday night?

It’s ALL about the performance though. Skintight black outfits that sparkle and shimmer, and have an almighty amount of cleavege bursting out of them for dear life. Lots of hair flicking and dramatic arm movements too. They spend the first half of the performance in front of a white screen, and the second half being joined by three younger male dancers.

It’s all the hotness we were hoping for and more. Well done Shirley and her angels.

*IMPORTANT POINT* Shirley attempts a very challenging and large note as the key change kicks in – perhaps to right the wrong of her last Melodifestivalen appearance in 2009. Let’s hope she pulls it off!

Sebastian: ‘No One Else Could’
Up-tempo disco rock. Like The Killers, perhaps? It certainly has a ‘killer’ chorus to it anyway, ha ha……(*tumble weed*). ANYWAY, yes we like the chorus, it’s got a catchy punch to it. And we’re even treated to a key change too. The rest of it we’re sure will grow on us in time.

The performance is simple, but it works really well. Sebastian stands in the centre of the stage dressed in black, and moves around freely as and when the camera needs him too. He’s surrounded by a little pack of four mini Hanna Lindblads scarpering around him too, who never get too close, but add something different and unique to the performance anyway.

Sara Varga: ‘Spring För Livet’
This has been the surprise of the afternoon for us. We weren’t sure what to expect exactly, but we weren’t expecting to be that impressed by it either. But we really are. A chirpy, mid-tempo, retro, jazz-lite, number. It’s got quite a summary vibe to it, or perhaps that should be Spring, given the title! But it’s definitely catchy. Not what we like normally, but we’re really liking this.

Performance-wise, it’s beautiful. Sara stays at the mic stand dressed in a white silk, Grecian floor-length gown, set off by gold accessories, her jet-black hair, and her very pretty face.

We have one critique though, and it’s a big one. She looks scared stiff, and she doesn’t smile once. She looks terrified, and too timid. At the end of the day, she’s got a great song and she looks fantastic, so she really needs to own it. And to have some confidence in what she’s doing. Or at the very least, look comfortable. Otherwise we can’t see as many people voting for it as there should be.

Eric Saade: ‘Popular’
As we mentioned at the start, this was expected to be the star of the night and the song of the night. Does it live up to those expectations?….Definitely! We love it. It’s ‘Manboy’ merged with ‘It’s Gonna Rain’, and given a more mature gloss – Manboy has grown up! The song really comes into its own straight away, but especially during the second half. That’s when we get the fabtastic middle eight (more on that below!), and the last minute of euphoric pop, and the extended ouro. It’s got shades of Boney M’s ‘Rasputin’ in the music, and fragments of Lili & Susie’s ‘Oh Mama’ in the melody too. But mostly shards of the aforementiond two other Eric songs, which the composer of ‘Popular’, Fredrik Kempe, also wrote. It’s really a phenomenal song though, with shockingly good beats intricately running throughout.

The performance is about as much a part of this package as the song is though – we’re given a seriously world class performance. From the choreography, to the clobber, to the special effects….it’s all spectacular. The best bit comes during the middle eight, when Eric is enclosed inside a glass box which he has to smash his way out of, with the help of some explosions. All of the visuals for that part though are kept for the television viewers, so we weren’t able to see too much of it inside the arena. And Eric fans, rejoice – there’s crotch grabbing and groin thrusting aplenty!!!

Pleasingly good, and another good week. Not as strong as last week’s show, but then last week WAS the strongest Melodifestivalen heat since Heat 1 in 2005 (it still shocks us to our core every time we imagine the carnage)!

You can watch the whole show live, wherever you are in the world, at 7pm (UK time) tomorrow evening at www.svtplay.se. Or you can watch the one minute clips from yesterday’s rehearsals that SVT uploaded last night, here.

Melodifestivalen 2011: Our chat with Eric Saade!