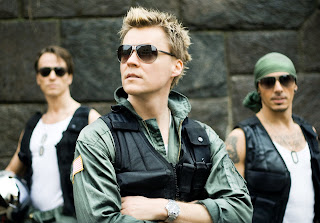 ‘In The Heat of the Night’ by Star Pilots has this week made the BBC Radio 1 playlist. After months of being played on the Friday night ‘Floorfillers’ show, it’s been C-Listed at the station – which means that it’ll get played a few times every day. This bodes quite well ahead of its May 11th release date.

Things aren’t looking so good for Ercola featuring Daniella though unfortunately. Released this week, ‘Every Word’ has so far failed to reach the top 40 in the midweek charts, despite huge support from national radio. It’s steadily climbing the iTunes chart (currently at number 39), but unless it sells phenomenal amounts in the next 24 hours, it’s looking to flop big time on Sunday’s chart. BBC Radio 1 (who had previously B-Listed it) have now removed it from their main playlist since seeing the midweek chart position. However, it did get played on Scott Mills’ Floorfillers show tonight.

Basshunter released the fifth single from his ‘Now You’re Gone’ album this week. ‘Walk On Water’ had a brand new video made for it, and Basshunter himself has been performing all week, headlining the Dance Nation tour around the country. But nevertheless, the single release is hanging around at the very bottom of the top 75, failing to sell. In fairness though, his album has sold over 300,000 copies in the UK, so a fifth single was never likely to be a huge hit, given that most of his fans will already own it on the album.

Two seperate scandipoppets make their debut appearance on the UK club charts this month. It’s too early for them to be added to radio yet, but their singles were sent to clubs last week. DJ’s from all around the country compiled lists of what they’re liking and what they’re playing – and in the latest UK club charts, Agnes is at number 5 with ‘Release Me’, and Gathania is at number 9 with ‘Blame It On You’! Very strong debuts for both girls.

Eva & The Heartmaker: ‘Gone In A Flash’