It was with great relief today that we discovered Marie Serneholt will be the third wildcard in Melodifestivalen 2009. Marie hasn’t given us any new music since her debut solo album ‘Enjoy The Ride’ in March 2006, and so fans are delighted that we’ll be hearing some new material as early as February/March next year. Melodifestivalen will also be the perfect reignition to her music career; ‘Enjoy The Ride’ wasn’t exactly a major success, and she’s seemed happy with her sporadic modelling career with Maybeline Cosmetics and Joy Clothing up until now. Despite being a familiar face in Sweden since 1999, this will be Marie’s first year competing. She may not have had a massive hit album in her solo career yet but she’s still a big name, and anything less than making the final will be seen as a big disappointment. The addition of her name to the list of participants has propelled the competition to new heights of tightness!

Marie Serneholt first made her name as part of Swedish pop group A*Teens. Starting off as an Abba cover band, and then releasing original material by their second album, they managed to sell 5 million albums around the world by the time they split in 2004. Their success was all the more commendable as they managed to make a small impact in the US too. They went on various tours as support, and took part in 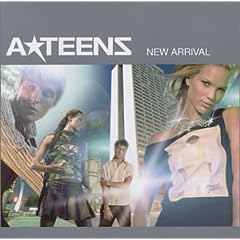 roadshows, mainly being taken under the wing of Disney Radio, who liked their unashamed europop sound tailored to youngsters. They released their debut album ‘The Abba Generation’ there, and then an amalgamation of their second and third European albums, ‘Pop Til You Drop’. In the UK, as well as having hits from ‘The Abba Generation’, they also made the top ten with ‘Upside Down’, the lead single from second album ‘Teen Spirit’, and one final hit in 2001 with ‘Halfway Around The World’. Our personal favourite album of theirs though was their third album ‘New Arrival’. It housed the likes of ‘Floorfiller’, ‘Cross My Heart’, ‘Let Your Heart Do All The Talking’, and ‘A Perfect Match’ (which contained the legendary lyric ‘’you love Grease baby, I love Snatch’’) – all of which have been played at the scandipop club night! However, it’s track ten on the album that was their finest moment. ‘Closer To Perfection’ is probably one of our favourite songs of all time – an absolute stunner of a pop/dance/electro song. Words can’t describe how amazing it is so if you haven’t already heard it, take a listen on youtube.

After A*Teens disbanded and she’d had a considerable break to get back to normality, Marie started work on her debut album. Jorgen Elofssen was at the helm and co-

wrote every track on there. She then signed to his label, Planet Six, part of Sony BMG. The album wasn’t a massive hit in Sweden, only reaching number 9. But its lead single ‘That’s The Way My Heart Goes’ is another phenomenal gem in Marie’s pop crown. It’s also got one of the campest videos of all time to accompany it. The song was a big hit. Follow up singles ‘I Need A House (which has now been covered by UK poppets Same Difference) and ‘Oxygen’ weren’t. Nevertheless, she’s got the reputation of a through and through pop queen, so fans have been anticipating her follow up ever since.

With her entry for next year’s ‘Melodifestivalen’, it looks like she won’t disappoint. The song is called ‘Disconnect Me’, and has been composed by Peter Bolstrom and Tommy Nilsson. It’s described as an electro number, with Mediterranean influences, and a bit of John Barry (James Bond composer – strings ahoy!!!). Peter Bolstrom has recently given us Elin Lanto’s ‘Discotheque’ (*SCREAM*), and has also worked with Carola, Da Buzz, and on the album we wrote about last month by Victoria Silvstedt.

Excellent news all round!