We’ve had a few emails recently asking us to explain what exactly is going on with the Swedish singles chart, as nowadays it appears to be completely unrepresentative of what people in Sweden are actually buying – looking nothing like the iTunes chart for example. And that’s because it IS totally unrepresentative of what people in Sweden are buying! Which can be a little bit confusing. It’s supposed to be a singles chart after all. So we figured we’d set the record straight here for those interested in the stat geek fodder that is the music charts.

The singles chart in Sweden is called Sverigetopplisten, and is published every Friday here. Because nowadays Spotify streaming in Sweden is actually a whole lot more popular than actually buying music, it was decided by The Powers That Be that as of October 29th last year, the singles chart would include data from online streaming services such as Spotify – the first official singles chart in the world to do so. Exactly what that percentage is, is unclear. But it’s at least 50% and most probably a majority percentage. Now while this has become quite useful in seeing what music people are listening to in Sweden, it’s become completely redundant for those still interested in seeing which songs the Swedes are actually spending their money on and buying. 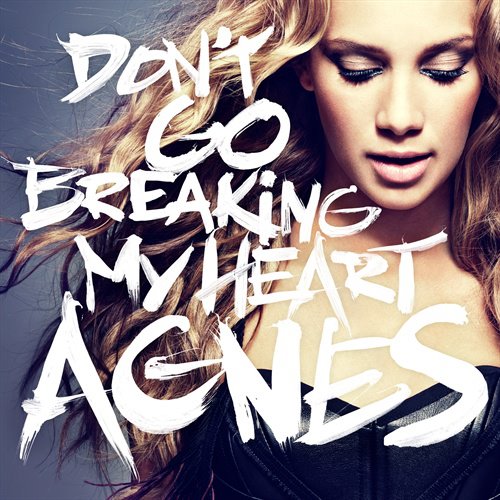 Take the recent big release from Agnes for example, ‘Don’t Go Breaking My Heart’. Released on Wednesday September 21st, it was eligible to make the latest chart which was published last Friday. The fact that it went to number 1 on iTunes within 24 hours and has stayed in the top 10 ever since, would lead you to believe that it was guaranteed a top 10 placing on the singles chart. Or even making an allowance for low Spotify plays, you’d think that it would be top 20 at least. But it wasn’t even in the top 60. The same applied for Loreen’s ‘Sober’ which was released a week beforehand. That also went to number 1 on iTunes within 24 hours and stayed in the top 10 for a week. But it’s yet to make an appearance in the top 60 of Sverigetopplisten. What’s a little annoying is that to an international onlooker checking Sverigetopplisten every week, they’d be forgiven for coming to the conclusion that ‘Don’t Go Breaking My Heart’ and ‘Sober’ haven’t done very well, and that they’d flopped. Oh dear – will they get dropped – will there be an album?! And that’s kind of unfair, since both songs actually have been selling quite well. True, sales on Swedish iTunes are quite minimal, and you can make the top 30 on very little sales – but then you’ll drop down the chart a few days later. A single which goes to number 1 and stays in the top 10 for a number of weeks IS genuinely selling well, by Swedish standards anyway. Christ knows how you define a ‘hit’ these days, but ‘Don’t Go Breaking My Heart’ most certainly isn’t a flop.

So yes – don’t look at Sverigetopplistan if you want to see what people are buying. But us chart geeks DO want to see what people are buying. Thankfully though, and what a lot of people outside of Sweden don’t realise, is that there is actually a pure sales chart that Swedish people use. It’s called Digilistan. Compiled by Nielsen SoundScan who do most official charts around the world, and published every Sunday on P3 radio’s website – just like how Radio 1 publishes the UK singles chart on their website every Sunday too. It’s made up of sales only (digital sales, but since you can’t buy physical singles in Sweden anymore aside from at one-off signing appearances, that’s fine). A quick look at the latest one shows that all is as we expected with our aforementioned ‘Don’t Go Breaking My Heart’ and ‘Sober’. The former enters at 3, and the latter drops to 14 after entering at 6 last week.

So it’s Digilistan you need to look at every week to see what people are buying. Personally, we’ve more or less stopped looking at Sverigetopplistan for singles – although of course their album charts are still ‘THE’ album charts.

Oh, one more strange nuance that people have noticed with Sverigetopplistan – in the past, there was a startling trend for some singles to be seen entering the chart in the top 5 one week, and then disappearing from the top 60 altogether the following week. And then perhaps re-entering a few weeks later quite high, only to be never seen again. This is due to those signing appearances that artists do around Sweden. As a result, it was mostly happening to singles by artists that appeal to a younger demographic. Artists like Amy Diamond, and Eric Saade, and it’s how Rebound got their number 1 single last year with ‘Hurricane’. If an artist goes to the bother of doing a signing, and if enough people show up to buy the signed single, then a high place on Sverigetopplistan is guaranteed. It still happens nowadays, but not as much as in years gone by. Bizarrely, there was also the case last year of Jenny Berggren’s ‘Here I Am’ debuting in the top 20 one week and then disappearing from the chart for good. The reason? She’d done a gig at Paradise club in Stockholm, and arranged that when people hand over money for their entrance fee, they get a copy of ‘Here I Am’, whether they want it or not! And because money had changed hands, this made it chart eligible. How corruptible!

There we are. Enlightenment in the form of chart dissection.

LARGE EDIT!: One thing we have learned since posting this article (thanks to the ever knowledgeable Christoffer in the scandipop Facebook group), goes a long way towards explaining why iTunes data seems to be so far removed from what we see on Sverigetopplistan every week. It’s because Apple have actually stopped supplying Sverigetopplistan with iTunes sales data, as they are so annoyed that the chart now includes online streaming data as well. Instead, Apple now only supply Digilistan with their data. Confirming that, as stated above, Digilistan really is the only chart in Sweden that is related to singles sales.